Like many bridge clubs, Geelong initially rented space, before purchasing land and building the current clubrooms at Newcomb. In 2017 the clubrooms were renovated and in 2021 the car park is being upgraded and expanded with the help of a City of Greater Geelong grant.

The additional space may be required sooner rather than later, thanks to Geelong’s welcoming stance to new and visiting players, its popular social events, and the arrival of more sea-changers in Geelong.

“Our teacher, Dot Read, keeps the beginners under her wing for ten weeks. This includes basic beginner lessons and some revision/supervised play,” Alan said.

“Following the ten initial weeks, beginners are encouraged to attend supervised play sessions. Directed by experienced players, every second Tuesday session includes a short lesson to help players prepare for the next level of play. The supervisor acts as the standby, if needed so that everyone gets a game.

“Follow-on lessons for beginners, intermediate and advanced level classes are also offered at various times throughout the year by both club members and visiting teachers. These are always well attended with members of other clubs welcome to participate.”

A strong education focus is partnered by the club’s efforts to market the beginners’ lessons and events.

Alan said “The number of people enrolling in the beginner’s classes has increased significantly, following placing a large sign advertising them at the front of our clubrooms which are on a busy road.

“We have also advertised in the local newspaper and conducted a targeted letterbox drop in the Geelong region. We are also exploring other ways to attract new, younger members to learn this popular game and to make it a lifetime pursuit.”

Geelong also has a strong history of competing at the regional, state, and national levels. It has been represented in the Grand National Open Teams event every year since its inception in 1973.

Alan said “The club’s Pizza Sundays, held once a month, have also proved popular with newer players and older players alike. A more relaxed atmosphere enables all levels of players to come together for a casual evening of card play. Starting at 4 pm, play pauses at 6 pm for pizza and wine/soft drinks, followed by completion of the movement around 8 pm.

“Geelong’s efforts to build a strong club have been recognised at previous years’ Victorian Bridge Association excellence awards. Geelong is proud of its achievements and looks forward to a very bright future in the region. 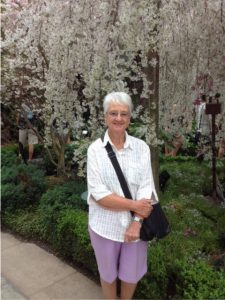 People who know me may be surprised to know that I wasn’t particularly keen on cards as a youngster. After one or two hands of 500 with my parents, I was always glad of the opportunity to escape. It wasn’t until I met my husband, Geoff, that I really started to enjoy a game of cards. We played 500, Canasta and Solo. However, once we started to learn bridge all other card games really did become boring.

I took on both bridge and golf around the same time; bridge for the mind and golf for the body. Both are addictive! My husband and I had been wanting to learn bridge for awhile but waited until the children were off our hands before taking the plunge.

My first experience of teaching cards was when I used to take secondary school students on camping trips to Central Australia and the Great Barrier Reef. I would always have a pack of cards with me in case anyone wanted a game of cards around the campfire at night.

I took up teaching bridge when the Warrnambool club asked me to give it a go. I had almost retired from school teaching and this was an opportunity to keep up my love of teaching.

I love teaching bridge because of the people. I feel I am in a very privileged position having the opportunity to meet so many lovely people. I feel a real bond is created between myself and the people I teach. They play a very important part in my life.

I have made some very good friends through bridge. My husband and I liked calling into bridge clubs whilst travelling north for the winter. We much preferred going along to the local bridge club for a game of bridge, rather than sitting in the caravan of an evening.