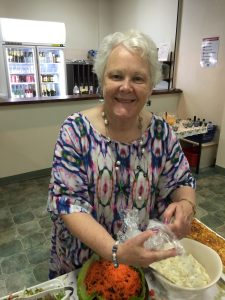 I grew up in a family with parents who played social bridge with friends on a Saturday night. I well recall being put, along with my brother and sister, to sleep in the bed of the couple whose home they were playing at and being woken up to go home at midnight.

My father learned to play bridge during the war I think and my mother took up bridge as a follow on from playing Solo with friends. She is now 91 and still playing bridge socially and at WABC.

I first started playing bridge in 1984. My husband was transferred by IBM to Sydney and with nothing else to do as an now unemployed speech therapist, I took up bridge lessons at the Chatswood Bridge Club and was soon hooked. In those days we had eight lessons, were offered four more and then four supervised sessions before being told to join the main game. However, it was a lot easier then, than today, with all the advanced bidding methods now in use.

I became a bridge teacher by default with no ambitions to pursue this. We moved to Mandurah in 1998 and I soon joined the bridge players there. This was before their club was affiliated with ABF. After a bit, they asked me to help them with some lessons and so began my bridge teaching career. Soon after, Mandurah affiliated and as the club grew we needed directors and so I began directing.

In bridge I had found something I could really enjoy. I love the mental stimulation of bridge, meeting people from all walks of life and making friends. Now I enjoy contributing to bridge to help others do the same.