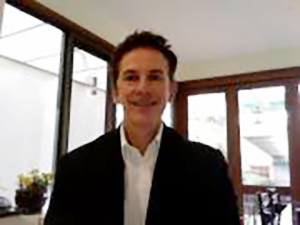 How did you discover Bridge? When did you first start playing?
I discovered Bridge whilst waiting in the local doctors surgery. The receptionist had revealed my life story within five minutes including I was gay, had a moved from Sydney and that I thought I would go crazy if my retirement was just growing vegetables and traveling for the next 40 years. Jill suggested Bridge.

Why did you decide to become a Bridge Teacher?
Well actually I didn’t really decide, thinking that I wasn’t really the teacher type of person, I sort of fell into it. It was when professors and pillars of educational institutions started advising me that I was a very good teacher. I replied, I’m surprised as my most successful career to date had been in sales. Their reply was “exactly” you have to be able to connect with people to be a good teacher!

What do you enjoy most about playing/teaching Bridge?
Seeing the “penny drop” for people when suddenly they realise they may have “Got it”. Then seeing their faces when they realise that you never really get it, it’s ongoing…. bridge learning is eternal.

Tell us something most people don’t know about you?
Mmmm not much, I do like to self promote. Probably that I’m a gay male nun of “The Sisters of Perpetual Indulgence” and as far as I know I’m the oldest Novice nun in the world. We still actively support gay groups, disadvantaged people, including homeless youth. I was also integral to the starting of the Sydney Gay & Lesbian Mardi Gras and our group is still held in high esteem after nearly 40 years.