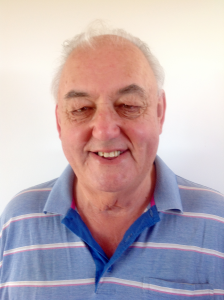 I have always had a competitive streak and in my younger days was a keen rugby player and cricketer. In my later years I became a cricket umpire and had the honour of umpiring the first over-70s Test Match between England and Australia at Dromana.

I had my first bridge lessons many years ago under George Rogerson. I still remember his most important message – “when you get up in the morning, look in the mirror, and practise saying PASS” – advice which I still tend to ignore to this day. After six lessons I knew everything, and went back to working full time.

Many years later, about five years after Margaret became a regular player, I decided to start playing regularly and have never looked back. I love the competition as well as the great social scene. A bridge player never leads to be lonely.

It was obvious when we started our Bridge Club that to attract new players we had to provide not just beginner’s lessons but a formal progression to club duplicate. Accordingly, we added a weekly supervised session on a Thursday morning. The format varies, but will normally take the format of a 30 minute lesson followed by general play. The emphasis is on the fun of playing bridge – discussion is encouraged, and smiling faces the norm. When players are comfortable, they can move up seamlessly to the Thursday afternoon duplicate.

We get great satisfaction from watching our beginners progress through the ranks and start playing in congresses – we will be well represented at the Gold Coast Congress.

One of the highlights of my bridge career was playing with Margaret at the Kuching Bridge Congress in Borneo partnered by a couple of non-English speaking Indonesians. We called our team the Kalimantan Wallabies and remained in contact for some time.