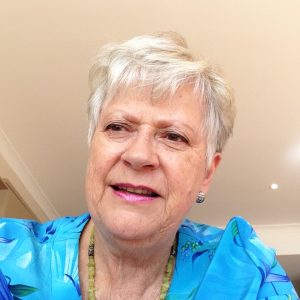 How did you discover bridge? When did you first start playing?
I divorced in 1987 and needed a distraction so I enrolled in lessons, after which I only played spasmodically in friends’ homes at night for many years. In 1990, I re-married and 6 years later, became a ‘retired’ Solicitor. I then invited friends around for Tennis, on a regular basis, and this included Trish Giles (who later became Mayor of Pittwater and was awarded the OAM) and Anita Kite. Trish promoted the furthering of  my interest in Bridge by introducing me to Margaret Partridge (now Rogers) and Margaret and I have been best friends and bridge partners now for around 20 years.

Why did you decide to become a bridge teacher?
I loved the game so much I continued furthering my education at courses, studied books, and then became a qualified Bridge Director. In 2008, I was approached by John Roberts (on the recommendation of Joan McClelland) to give a ½ hour lesson, followed by a supervised class, once a week at R.M.Y.C. I nervously accepted but, with the help of John and his lessons, I soon felt very comfortable. I still do these classes.

What do you enjoy most about playing/teaching bridge?
I love the challenge of the mind, the forever meeting new people, playing with different partners and the never-ending venues and congresses. I thoroughly enjoy teaching bridge as my husband attends my classes (he says for reasons of ‘home maintenance’) and, inadvertently, he gives me so much ammunition for humour that my classes are very relaxing and enjoyable for all.

Tell us something most people don’t know about you?
I left School at 14, then College at 15, as my father believed girls should be “barefoot,  pregnant and in the kitchen”. I was selected, because of my College results, by a firm of Sydney Solicitors to work for them, which I did. In 1965 I married, had four children (under 6). As they grew up, I decided I wanted to further my education and become a Solicitor so I enrolled as a ‘mature age student’. My first husband did not approve and told me he “would never sleep with a lawyer”. He didn’t have to as we divorced in 1987 and my Bachelor of Law Degree was conferred in 1988. I am a very fortunate woman as my second husband, Brent, of 28 years, is quite proud of my achievements and gives me total support.