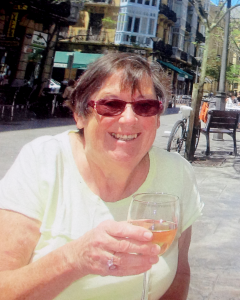 I run the Rye Beach Bridge Club with my husband Brian on the Mornington Peninsula in Victoria. There are several reasons I took up bridge about 25 years ago, but I had no idea it was going to take over my life.

Both Brian and I decided to teach bridge as it is the best way of attracting new members to our club. I enjoy teaching beginners bridge. I didn’t think I would be able to do it but with Joan’s help I have become quite successful at it. I was very nervous to begin with but it gets easier each course I do. My clients are mainly retirees and I am actually thinking of cutting the 6 week course down to 4 weeks as Joan has said ‘less can be more’.

Recently my 8 year old grandson asked me to teach him bridge. I was amazed how much he absorbed. He apparently went home and ‘taught’ his dad. If only we could teach bridge in primary schools it would be amazing. We are running our annual congress in March and I am hoping that he will caddy for us.

I enjoy the travel involved with bridge. I have played in England, Wales and France as well as the Kuching Congress in Borneo, and we are hoping to play in Sri Lanka later this year. Last year we decided to play in the Alice Springs congress and as we had never seen the Outback we decided to drive and camp under the stars. It was amazing and the bridge was great fun too. It gives me great satisfaction that some of our beginners have now started entering congresses, and will be playing in the Rookies and Novices at this year’s Gold Coast Congress.